With the recent pandemic disease caused by covid-19 virus, it is important to develop models that can better monitor how the disease will be propagated with time. We can check the total Covid cases that have occurred across the world from Jan 2020 till present day. This will provide a nice summary of the evolution of disease spread across time.

In this post, we would be going through some basic compartmental-based models which could be helpful is understanding the underlying mechanism of the disease spread in time. This could be a motivation to create certain hybrid set of models that combined the benefits of these maths-based models with data-driven models.

Some of the common used terms used while developing mathematical models for infectious disease modeling are given as below:

The basic fundamental drivers of getting an epidemic disease is:

The spread of infectious diseases can be unpredictable. In addition to this, modelling in real time has particular challenges, not least the speed at which data needs to be gathered and processed in order to inform models.

Infectious disease modeling is a great example of how an interdisciplinary approach to science can have significant impact on the world around us. Underpinning infectious disease modeling is mathematics. Through the use of differential equations and statistical techniques, we can project the outcome of different interventions scenarios and also study past epidemics. We can use mathematical models in different domains to get effective results. Mathematical modelling is increasingly being used to support public health decision-making in the control of infectious diseases.

In this approach, we divide the population into different compartments or divisions where we make a simple assumption that everyone in the same compartment is subjected to the same hazards.

Imagine a cohort of people with an simple infectious disease. Assume that ultimately, everyone recovers from the infection after a certain infectious period. We can then organize a cohort into two compartments. One is the number of people still infected with the disease \( I \) and the other is the number of people who have recovered \( R \). We start with everyone in the infected compartment and end up with everyone in the recovered compartment as indicated in the below figure:

The basic quesiton that could arise here is that how long does it take for people to move from one compartment to another? If we knew the infectious period, then could we predict how many people would be infected and recovered after one week, after a month, or how about after a year?

To model this, we’re going to introduce the rate of transition between I and R. We can model the dynamics of this cohort using just two differential equations:

We can add the complexity to out previous model by introducing a new compartment \( M \) which indicates the mortality or number of people dying from the disease. 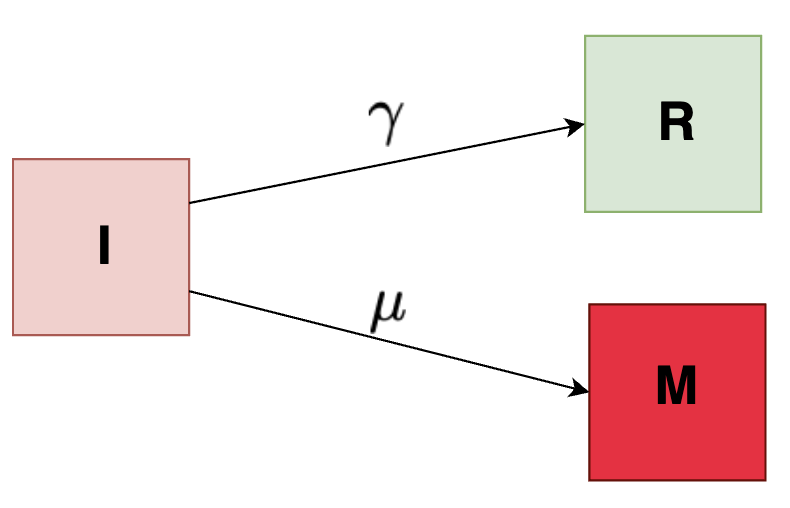 The required set of equations describing the functions are given below:

And the correponding differential equations are given below:

This is one of the more frequently used compartmental-based infectious disease modeling. In the SIR model, the entire population is divided into three compartments: Incidence, \( S \); Prevalence, \( I \) and Recovery, \( R \).

Assumptions of this model are (i) homogeneous population – everyone in the same compartment is subject to the same hazards, (ii) well mixed population – All susceptible people have the same risk of getting infected for a given number of infected people.

\[\begin{align*} p &= \text{per contact with an infectious person, probability of a susceptible person becoming infected} \\ c &= \text{Average number of contacts a susceptible make per day} \\ \frac{I}{N} &= \text{fraction of population that is infected} \end{align*}\]

Here, \( \beta \), also called infection term is not measured directly, but esimtated indirectly from data. The required differential equations for each state of this model is given as below:

The previously discussed SIR model is one of the simplest compartmental models in infectious disease dynamics. It might be effective when we are assuming the situation where people are immediately infectious upon getting infected. However, in reality, we know that diseases can be more complex. Some infections involve an intermediate period when the pathogen is establishing itself within a host before individuals become infectious. Other infections involve an asymptomatic phase where individuals can pass on infection even without symptoms.

In order to account for the intermediate period of latent period, we can introduce a new state, \( E \) indicating latent phase, which suggests the number of people exposed implying having infection but are not yet infectious, and so we get the following figure:

We can also add a different complexity to our model by adding compartments having incubation period for individuals in the population as shown in the following:

The need to simulate the impact of different interventions on the disease transmission rate. Examples of interventions include – effect of vaccination in reducing susceptibility, effect of treatment on the recovery rate and so on.

There is a use of mathematical models in looking at the potential impact of treatment or vaccination. Suppose, that we have a fully effective treatment that can cure people immediately and also we put people on treatment on average two days after their symptoms begin. In order to model this, we add an additional rate of transition from \( I \) to \( R \) to capture the effect of treatment.

If we consider the basic SIR model as seen earlier, then the model is appropriate for a disease where the population is relatively stable over time. So, we don’t need to worry about population turnover and where immunity doesn’t wane appreciably over the epidemic timescale.

How to counter the spread of disease?

Epidemic disease like flu, or in more recent times coronavirus has a large impact on causing infections at a rapid state since it transmits through contact. Now, looking at the big picture the question arises – How do we eliminate disease?. The most usual answer is – Through vaccination. But the other question comes – How do we provide vaccinations?. And this is where we need to think about in terms of social network world. Now, we can have some possible choices. If we have a network of people living in a region or a city and we go about vaccinating them randomly. Will it do the business of eliminating the disease? The answer would be a No!. Because the random people that are being provided the vaccines are not well-connected and therefore will not impact and reduction of the spread of the disease.

A major way to slow the spread of disease is to come with a strategy of tracing contacts that came in close contact with the infected person. This could be important since if we identify those close contacts then they can be monitor and notify with the necessary guidelines and recommendations. This can prove to be helpful in people to take preventive measures so that there is there is no further spread of disease. This is a key mechanism to limit the community spread.