In this post, fundamental concepts of social psychology will be described. First, we need to understand some preliminary terms related to this branch of psychology and then some of the important topics will be briefly discussed.

Social psychology – scientific study of how people think about, influence, and relate to one another.

Hindsight bias – “I-knew-it-all-along” effect is the tendency to exaggerate, after learning an outcome, one’s ability to have foreseen the outcome.

Stanley Miligram’s social experiment on obedience – It was an experiment conducted to highlight the conflict between obedience to authority and personal conscience.

Conformity – a change in the behavior or belief as a result of social pressure.

Solomon Asch’s experiment on conformity – It was an experiment to investigate the extent to which social pressure from a majority group could affect a person to conform.

Aggression – physical or verbal behavior intended to cause harm. Exposure to TV violence causes aggression, at least in some cases.

Group dynamics is just a fancy term for psychological processes and behaviors that occur either within a group (that is, intragroup dynamics) or between groups (intergroup dynamics).

Groupthink – a well known group dynamic in which the quality of group decision making suffers when a cohesive group becomes insulated from dissenting viewpoints, especially when a group leader promotes a particular solution or a particular course of action, and others become reluctant to disagree.

Groups typically outperform individuals when solving difficult problems. This is just one reason why cultures around the world rely so heavily on working groups and committees, panels, boards, task forces, and, of course, juries.

Abilene paradox – It is a paradox that occurs when groups of people take actions in contradiction to what they, as individuals, really want and end up defeating the very purposes they set out to achieve. 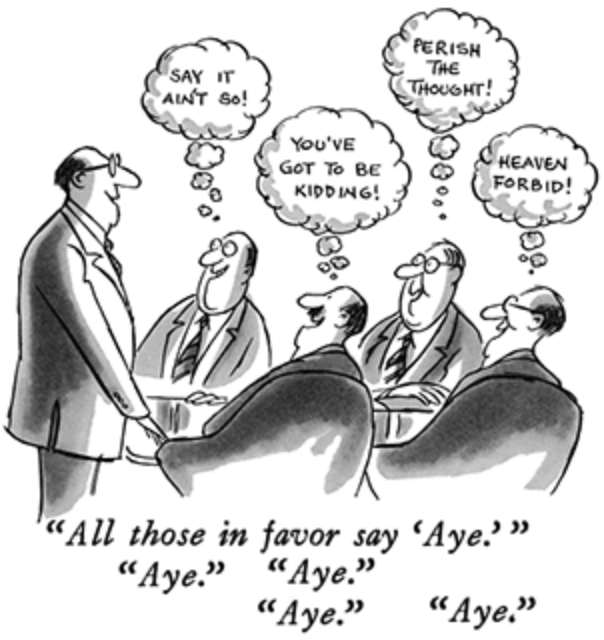 This can be better understand from the picture shown above where each individual group member’s thoughts are in direct conflict with the collective group’s decision.

Do Birds of a feather Flock together?

Surprisingly, there’s a very powerful factor that we rarely think of as important but is essential when it comes to friendship and romantic choices. That factor is known as proximity or closeness – not just physical closeness, but social closeness – that is, opportunities to interact. This is one of the reasons why people so often end up becoming friends with—or even marrying – their classmates, their co-workers, their neighbors, and so on.

In addition to proximity, another factor that’s very important in interpersonal attraction is similarity. Research has shown that people tend to be more attracted to others who are similar to them in age and education level, race and ethnicity, personality and attitudes, economic status, and even certain physical characteristics, such as height, wrist size, and blood type.

The idea that opposites attract, like two pieces of a jigsaw puzzle – something known formally as the complementarity hypothesis – has received relatively little research support. Even though it’s a romantic idea, and there are always exceptions, people don’t tend to choose friends or partners who have backgrounds, attitudes, or values that complement theirs.

It’s men who tend to be faster at falling in love and slower at falling out of love. This is a finding that surprises many people, and again, illustrates why research on relationships is so interesting and worth doing.